Finally, just a day before the end of 2020, a Brexit trade deal was eventually sealed between Britain and the EU over its future trading relations.

While much of the detail remained either unclear or muddied amid an agreement spanning well over 1,000 pages in length, the fact that at the 11th hour, it actually happened was greeted with relief in many quarters around Europe, and further afield.

Its implications for the Food and Drink sector in particular have been well documented by many, including Confectionery Production, notably that failure to secure a deal would have hurt many businesses in our industry from a logistics, ingredient sourcing, and most critically, pricing perspective.

This was neatly summed by British retailer Tesco, which assessed that a ‘no deal’ scenario would add an average of 5% to the cost of the average supermarket shop (including confectionery treats) – amounting to a significant amount above the natural rate of price inflation, adding to the further woes of an economy already under severe strain amid the coronavirus pandemic.

Thankfully that fate has now seemingly been averted (following meetings in Brussels last month between the UK’s PM Boris Johnson and EU Commission chief Ursula von der Leyen, pictured), which many observers had doubted would amount to anything. Yet the eagle-eyed enough to have trawled through the actual agreement documents have confirmed that there is a break clause in there after four years. So if either party isn’t happy with the arrangement, then it can be allowed to lapse.

While many will welcome the fact that there is now, even at this late stage, a greater degree of clarity surrounding key aspects of trade with our nearest neighbours, which accounts for over 40% of our exports, there are still a number of issues to be resolved.

As has been seen in national media reports, some businesses that export to the EU that are based in the UK, fear that sourcing ingredients for product ranges may still be subject to delays due to a greater level of paperwork for logistics operations that was not previously there. The UK is far off from being self-reliant in ingredients as well, so specialist confectionery manufacturers have expressed concerns over the past two years that adding to the complications of trading with the EU may also result in sourcing issues that have not been a factor with the country being previously part of the single market totalling 28 nations.

CAOBISCO, the European chocolate, biscuit and confectionery association had expressed its hopes that a trade deal could be concluded, so this will doubtless be welcome to many of its members across the EU who trade regularly with colleagues in the UK.

Among one of the most significant, if complex aspects of the negotiations has been that of if the UK had failed to gain any kind of agreement, having differing standards on all manner of goods, including confectionery and bakery product ranges would have added considerable trading issues between the two parties.

While tariffs have been averted on either side of the Channel, the cost of this to Britain in what it has formally given up, is a considerably long one in real terms. From losing automatic access to financial services markets that are a key part of the British economy, and the withdrawal from shared security and GPS data systems, through to the key removal of the freedom to live and work across the EU, which has been perhaps the most divisive issue. Only time will tell what the impact of these factors will be, but at least there is a sense from many that something was salvaged from an extremely challenging situation. 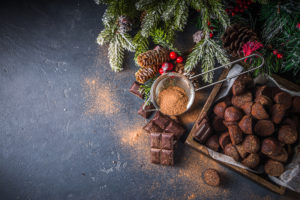 Wishing you all a fine festive time this Christmas