Easter confectionery hopes may be fuelled by growth in online retailing

As communities around the world settle down to celebrate Easter this weekend around the world, it’s certain that there will be plenty of opportunity to reflect on the monumental events of the past year.

It has been without question one of the most challenging in the careers of many people, whatever sector of business you’re in, and the confectionery industry is no exception to that amid the pandemic.

Within the UK at least, this will be the second year in a row that this key seasonal occasion will be disrupted by major retail closures and restrictions that have led observers to forecast that sales in the segment could be down by around 10%, given consumers inability to access confectionery stores (other than major supermarkets), that will clearly influence the potential reach of manufacturers in the sector.

However, as we have previously reported, there have been some glimmers of hope within the industry, which as far as the US is concerned, last year at least registered an upturn in Easter sales of 2.4%, to $4.1 billion, which the National Confectioners Association believed offered a strong sign of resilience for the sector moving into 2021.

Underlining this, key manufacturers including Ferrero, Mars, Mondelez, Hershey and Nestlé have all done their bit to put their latest ranges together for the season – with market analysts noting that this year in particular, some confectionery firms have favoured more sophisticated offerings targeting the adult consumer, rather than the classic child-centric offerings that had formerly made up many Easter confectionery aisles within stores.

This has led to some notable high-end offerings here in Britain from the likes of Fortnum and Mason, with its Sailboat Easter Egg, and equally stylish designs from the likes of Ferrero, Prestat, Hames Chocolates, and Love Cocoa delivering premium products that have seemingly engaged with a demographic that aims to keep the whole family satisfied rather than just its youngest members.

As far as the world’s largest single confectionery market is concerned, at least several of the most sizeable brands at least in part mirrored Europe in appearing to focus on releasing their Easter ranges early in light of the ongoing Covid crisis, including Hershey, which put out its Valentines and Easter launches back in January.

There have also been some encouraging signs within the vegan market that new products have been making their way to market – as I found this week speaking to Plamil Foods here in Kent within the UK, and other brands including Moo Free Chocolates, and new plant-based firm HiP also unveiling its own distinctive series for the confectionery market.

Though it’s clear that there have been new release coming forward amid the pandemic, it’s perhaps inevitable that the Covid crisis has unavoidably impacted on the breadth of potential products that could have found their way to market had we been in more settled times. With the significant loss of the key ISM event in Cologne this January (which did still manage to hold a new product contest as we reported last week), manufacturers have been severely lacking the kind of traditional testing grounds that have been such an enjoyable and valuable feature of our industry.

Returning to the UK, with stores not due to reopen until after Easter due to the pandemic, retailers will once again miss out on significant revenues- including those from confectionery and snacks that made the season the second most significant period of the year in many companies’ eyes, it’s a tough situation for many to soak up.

However, the boom in online trading that has been seen right across everything from artisan markets, through to major confectionery groups looks set to continue on the exceptionally strong trend that has been noted during the past year – meaning that this year’s Easter may yet offer up some surprisingly positive results in spite of the challenges which have emerged across global markets.

Impact of Brexit and Covid felt as confectionery exports nosedive 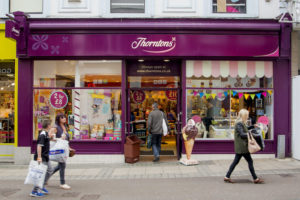