B-Tempted, the gluten free bakery as featured on Dragons’ Den, is launching its new vegan range of cupcakes and muffins.

The muffins will be available in three flavours – banana, banana and raspberry, and chocolate. They can be bought either as a single pack or twin pack for sharing.

According to the brand, the cupcakes feature a similar light and fresh sponge, topped with frosting and will be available as a single pack in four combinations –

Sarah Hilleary, founder of B-Tempted, explains, “I first started B-Tempted when I struggled to find really tasty gluten-free cakes. I refused to believe it wasn’t possible to combine delicious flavours and textures with gluten free ingredients.

“The huge surge in numbers of people identifying as vegan over the past few years makes veganism one of Britain’s fastest growing lifestyle movements, so it was a natural progression for us to extend our product development to cater for the vegan market too.”

B-Tempted Vegan Cupcakes are available at a RRP of £3.00 for a single pack.

The products contain almonds, soya and hazelnut (chocolate & hazelnut cupcake only). All products are gluten-free and vegan.

All packaging will be compostable. 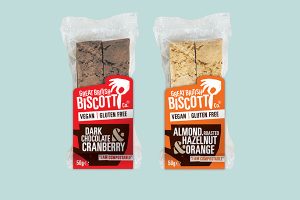